Negra Modelo and nachos of course! What did you think I was going to say fish n’ chips? It was the perfect finish to the most perfect first day of vacation I have ever experienced. Sometimes the first day of a trip can kind of hard; a transition day, especially if you are flying overseas. Your time clock is all screwed up, your tired, cranky, bloated from what was supposed to be food, and the smell of fourteen hours worth of recycled airplane air lingers in your nostrils. This trip was the true exception. It was as if all the travel stars were aligned just right. The plane ride was smooth, we actually fell asleep for more than an hour. On the ground, the Edinburgh public transportation was easy to understand and we found our apartment without a hitch! The place we rented was right off the Royal Mile and just walking distance to tons of sights, bars and restaurants. I recommend renting an apartment over a hotel room especially if you are staying for a week or more (this is a great site Cottages4You), it can actually be significantly cheaper. Plus, I think you get a better feel for a city. But I digress…

On this particular trip our good buddy and travel partner (who we call Shades) was with us. Once settled in to our temporary home, we three amigos set out in search of a good Scotch and some grub. Anyone who is close to me knows I like to stick to a plan. I am one of those annoying people that plans and prints itineraries for trips, making copies for everyone. According to my itinerary we could squeeze in an hour lunch, then be on our merry sightseeing way. What we ended up doing was completely opposite and totally awesome.

The Royal Mile is packed with stimulation: from gift shops to interesting taverns like Deacon Brodies and tours like that of Queen Mary’s Close (very cool, by the way), and of course, Edinburgh Castle. There is no shortage of things to choose from. In our panicked search to get something in our gullets (we were starving) we stopped at the first place we saw called The Albanach. A traditional bar with a traditional scottish menu and plenty of whiskeys to choose from (at least 100). Perfect.

Wanting to take in the city, the people and the sights, we took a seat on the patio despite the cool temperatures (it was mid-October). To our surprise we were not the only patrons with that idea. At the table next to us was a rowdy group of people from England, all wearing Scottish Jimmy hats (which are these, if you don’t know). By the several empty bottles of Chilean white wine littering their table, it was clear they were having a jolly good time. But, really, Chilean white wine in Edinburgh? We secretly scoffed at their drink choice and chuckled under our breath. After a couple of Belhavens and a sampling of Scotch, we soon became fast friends with our Scottish Jimmy hat wearing neighbors. And my itinerary, well that was long forgotten. We even ended up sharing a bottle of yes, Chilean white wine. Three years later, we are all still friends.

After a long night of fun with our new pals, we were in need of some serious fourth meal. Which brings me to the best late night nachos I have ever had (despite the fact the salsa may have very well been marinara). The restaurant, Pancho Villas! Naturally, the only only beer to have in Edinburgh at a Mexican restaurant…Negra Modelo. The moral of the story, sometimes you have to just let the fun come to you. Had we sticked to the plan we would have never had the good times we did…or the nachos.

Pancho Villas Edinburgh: What remains of our Mexican feast! 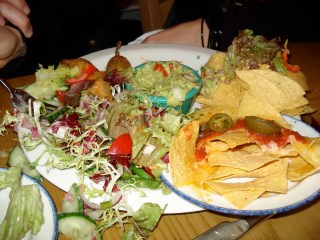 So completely random, but worth sharing. One of the telephone booths right outside the bar had the sticker below. What??? Never thought he would be the type to walk around with a label maker. 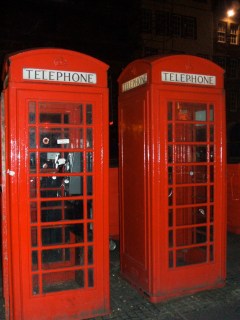