I thought I’d been to plenty of rockin’ parties in my day. Fun parties, huge parties, up-all-night parties! I thought wrong. No party measures up to the fun and excitement that is Oktoberfest in Munich.

Sitting side by side with people from all over the world; eating pretzels the size of your head; speaking different languages and sharing beers and smiles. This experience will forever go down as one of those days in my lifetime that may be impossible to top. It was that much fun.

We arrived to Munich on a Saturday and planned to hit up Oktoberfest on Sunday. The minute we stepped out of the airport, I immediately noticed two things: dirndls and lederhosen. Literally everywhere you looked guys and gals were decked out in the traditional dress. That was one thing I didn’t expect to see outside of the festival itself. It was so cute and added so much to the ambiance of being in Munich. It also made me realize that I had to have a dirndl.

Shades was smart and came pre-packed with a pair of lederhosen. I had semi-shopped around for a dirndl before our trip, but only came across “Sexy Bavarian” cheap-o Halloween costumes (which was not going to cut it). Luckily, there was a dirndl shop on almost every corner in Munich, so I didn’t have a problem finding one. How LONG it took me to find this particular one…I will save that post for another day. Let’s just say I am lucky to travel with two oh-so patient gentlemen. 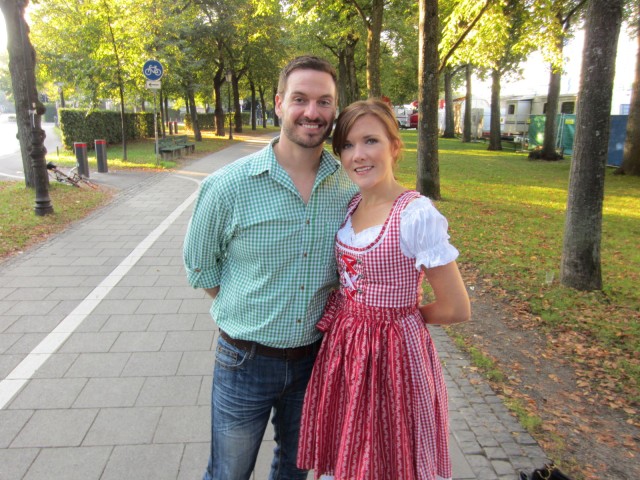 The beer tents open at 9AM on Sundays, so we made plans to get up early and be in line by 8AM and I am so glad we did. Even at 8, people were already lined up at almost every tent, waiting to charge in and get a seat. We did a loop around the festival grounds and decided we would start at the Hofbrau tent.

Even though there was a line to get in, at that early hour, we didn’t have any trouble snagging a prime seat. We found a table close to where the band was playing and parked it (and I mean parked it). We ended up staying in that very tent for 8 hours! A full work day of singing, drinking, eating and meeting new people. It was awesome.

One of the best things about getting to the tent so early (besides the freshly cleaned bathrooms) was watching the place fill up. It was like witnessing a live time lapse video. By 11AM, the place was packed and there wasn’t a seat in sight. 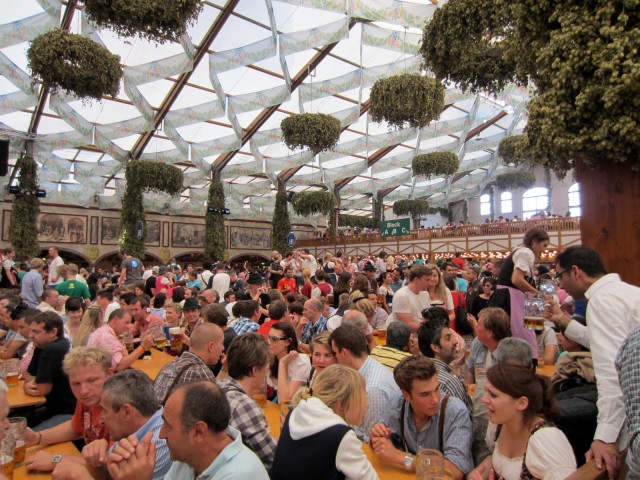 There is so much to share about that day, that I don’t want to overload it one post. We are working on putting together a video of our day at Oktoberfest…but for now, I will leave you with this little peek inside the Hofbrau  tent. The song “Hey Baby” was playing and literally everyone was standing on their seats singing along. It was so cool. 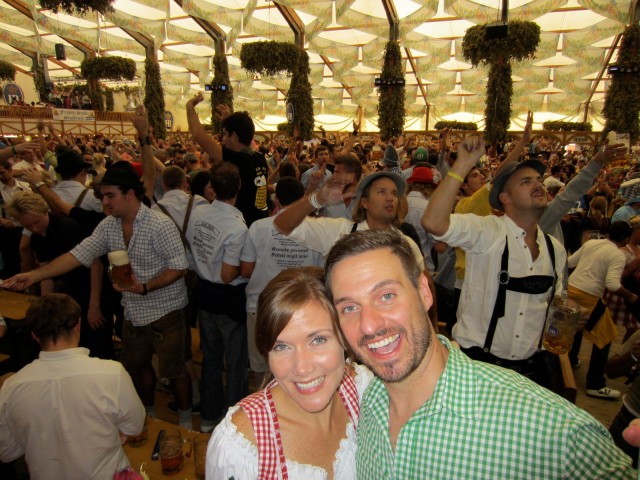